The mainboard in my PC which I used so far, an Asus P5Q, is from the beginning of 2009 – so it is about 6 years old now. At the time socket 775 and Intel Core 2 Duo (later Core 2 Quad) were still considered solid technology. Meanwhile there are significantly more powerful processors and a number of technical innovations which the old mainboard does not provide at all – for example UEFI, USB 3 or SATA with 6 GBit/s, which is specifically interesting for using SSDs. I could add USB 3 with an extra controller card but my practical expierences with that were not the best. Good reasons for me to renew the mainboard with the CPU.

A complete new PC was not neccessary since many single components got replaced or added anyway, as for example an SSD as system drive or a new graphics card. These parts are quite new and still good to be used with a current mainboard.

The CPUs by AMD were considered to be much cheaper and more efficient as the models by Intel for quite a while. Specifically at the time of the Pentium 4 the Athlon XP and its successors Athlon 64 and Athlon FX were often a recommendation to build cheap but yet powerful systems. I also had used a K6/2 and later an Athlon XP on my own.

Anyway Intel was not dormant and catched up quite well with the Core 2 Duo and the Core 2 Quad compared to the FX series by AMD. At least since the Core i where Intel integrated the memory controller as AMD did earlier in the Athlon 64 the difference between Intel and AMD is rather in favor of Intel. After some investigation I therefore decided to use a CPU by Intel again.

The components in detail 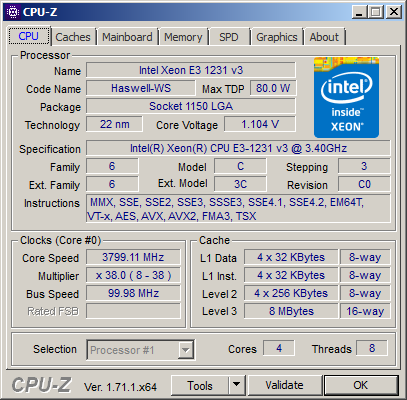 The characteristics of the Xeon E3 are equivalent to the Core i7 – four cores with hyperthreading, which means it can be used like an eight core CPU. However the Xeon lacks the integrated graphics unit and therefore costs about 50 EUR less and also needs a bit less energy as a similar Core i7. 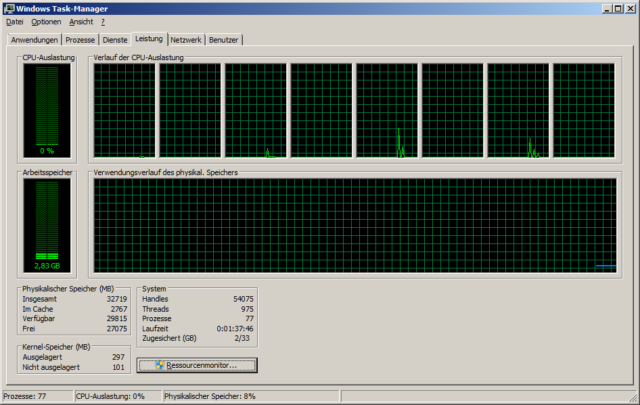 Suitable for the CPU I choose a mainboard with the current Intel Z97 chipset, an “MSI Z97 PC Mate”. 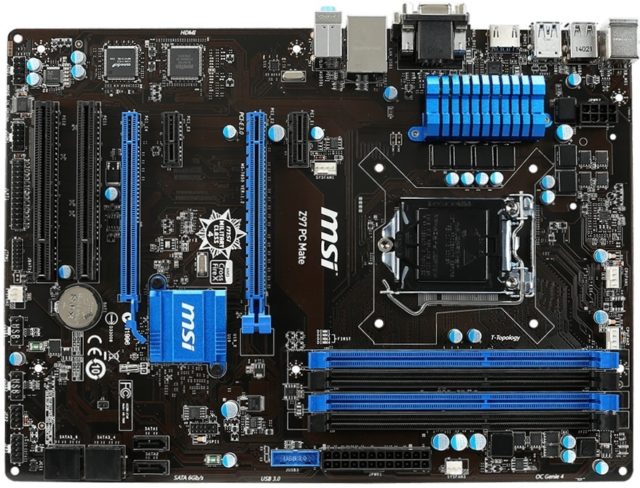 Additionally there are 32 GB RAM in the form of four PC3-12800 memory modules with 8 GB each. As CPU cooler an Arctic Cooling Freezer 7 Pro in the current revision 2 is used. Compared to the earlier version the fan is now white and not black. Also the way how the cooler is mounted to the mainboard had been changed to be universally useable for different CPUs by AMD and Intel. What did not change is the special suspension of the fan providing a very quiet operation. 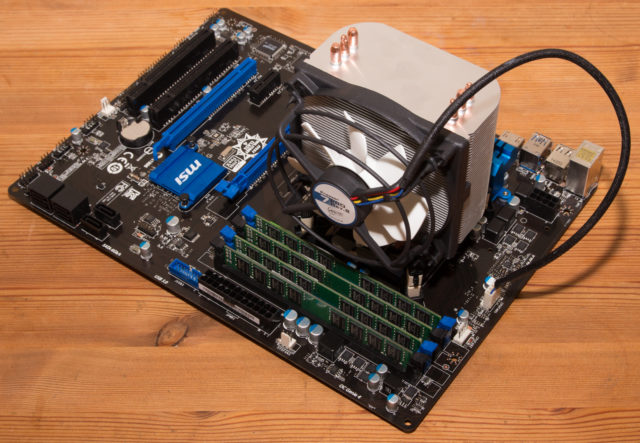 As a comparison a picture of the last modification 6 years ago with the Asus P5Q which was new that time: 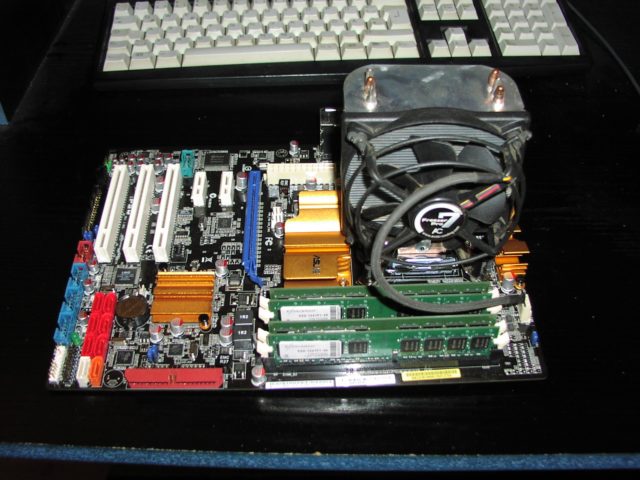 What I find quite remarkable is that there are still PS/2 connectors for keyboard and mouse – a technology which already had been invented 27(!) years ago (in April 1987 with the IBM PS/2 system). There are also onboard connectors for an RS232 interface and a parallel port, which needs an additional slot bracket to be purchased separately. The connection of my old but still favored Logitech trackball via PS/2 will still allow to power on the PC using a mouse click in the future – very nice :-). 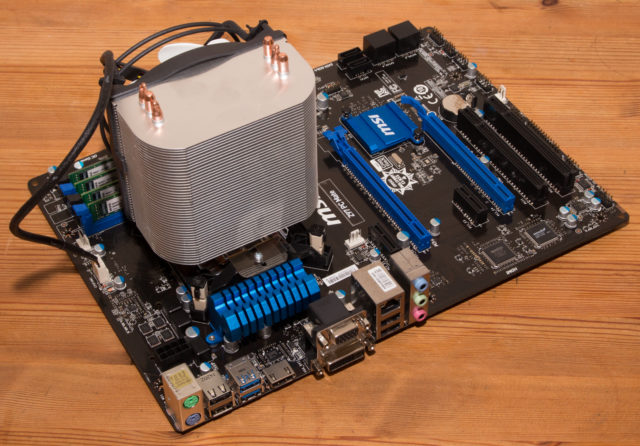 The existing connectors for HDMI, DVI and VGA will not be used since the CPU does not provide an integrated graphics unit and I use a separate graphics card anyway. Also the audio connectors will be without function as I will continue to use a separate PCI sound card which provides better quality as most onboard solutions (Creative Labs Audigy SE).

The mainboard provides two PCIe 16× (one as PCIe 3.0 for the “main slot” and one as PCIe 2.0), two PCIe 1× and two PCI. For drives there are six SATA ports. In addition to the already mentioned connectors there are four external USB 2 ports, two USB 3 ports and Gigabit ethernet. On the mainboard you will also find connectors for two USB 3 ports and four USB 2 ports which also need an additional slot bracket or a PC case with integrated ports. There is also an internal audio connector for the appropriate front panels of PC cases.

The only limitation: there is no connector for a floppy disk drive as this technology was already obsolete in 2009 and is practically non existent nowadays. Also PATA is not provided any longer. But this is not a problem as I already archived the content of floppy disks with old projects many years ago.

UEFI was not completely new for me – even though more theoretically than practically. After I have built in the new mainboard I first wanted to check the BIOS settings to specifically turn off onboard components which I don’t use, as the integrated sound chip, and to make sure that all drives had been recognized properly.

What I found then was indeed a new experience to me: “Click BIOS 4” – a graphical user interface including mouse operation with a martial logo which referes to “Military Class 4”. By the way: If you want to know more about the so called “certifcation” according MIL-STD-810G see this article at Wikipedia, specifically the section about the applicability to consumer products. Anway I am still confident that MSI used durable components.

The following screenshots were done within the BIOS itself – the small camera symbol on the top right corner, respectively the [F12] key, is intended for this very puprose. The screenshot will then be stored as a BMP file on an USB stick. 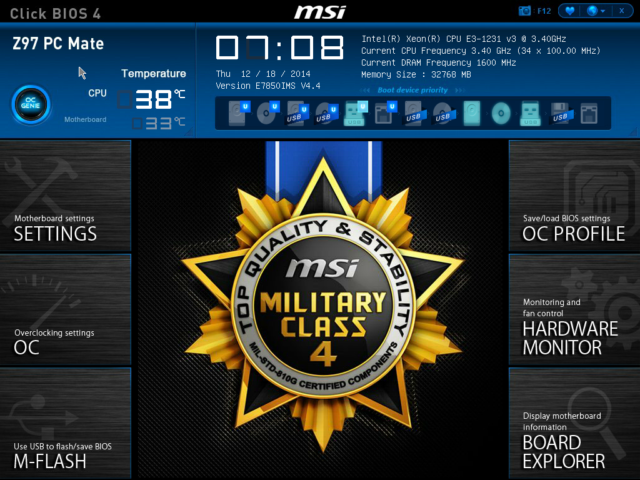 Very nice: You can adjust the parameters of the fan control in the BIOS very comfortable and you can also see a chart of the current temperature and fan speed over time. The speed of the case fan can also be adjusted. 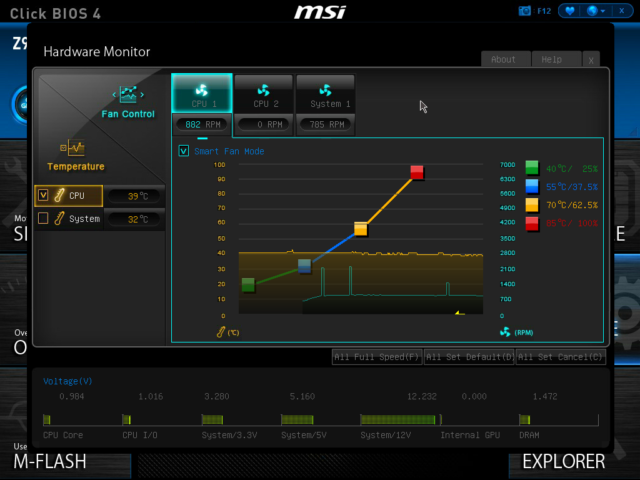 Also quite convenient: a “Board Explorer” in which you can see which slots and connectors are being used and for what. You can move the mouse over the individual elements and will then see details below the picture of the mainboard. 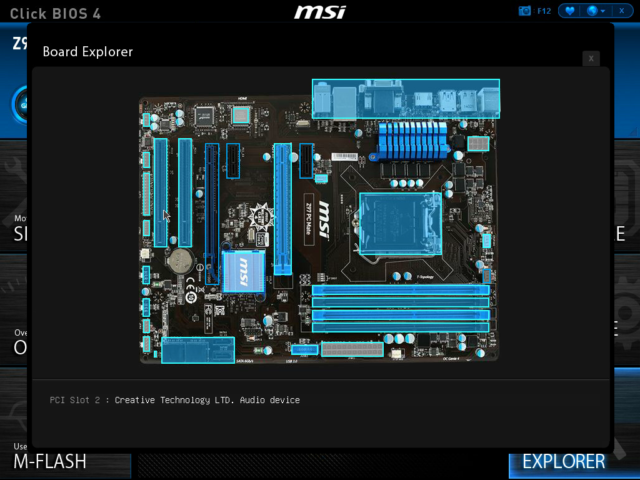 This is not really neccessary and technically UEFI is of course more than just an extravagant interface in the BIOS. I also have seen UEFI interfaces which were designed much simpler or used a traditional text based solution. Anyway MSI created a quite good solution which also helps finding errors if the system does not work as intended.

Like many other UEFI systems the BIOS of MSI also provides a “compatibility support module” which is enabled by default. This means that older operating systems or boot media on CD/DVD or USB sticks which require traditional BIOS support can still be booted.

As a result this saved me from doing a complete reinstallation :-). The existing installation of Windows 7 booted without any issues and was completely useable after setting up some drivers for the mainboard.

Comparison between old and new

As expected the new system was noticable faster. I specifically realized this in applications like Lightroom or IntelliJ IDEA. The more interesting question was of course what this means in detail. Before doing the conversion I did some tests and repeated them afterwards with the new system. The results in detail:

That the CPU performance was nearly three times higher than before, was to be expected. The OpenGL scene in Cinebench is not that much faster since the “adaptive sync” by Nvidia limits the frame rate to 60 FPS and the graphics card is still the same. Practically using a higher frame rate does not make sense anyway since the display also only renders 60 frames per second. Just for completeness: without active v-sync the OpenGL benchmark results in about 142 frames per second on the new system.

Quite remarkable is the improvement of the SSD which is being used as system drive (in particular a Samsung 840 Pro with 256 GB). The SATA ports with twice the speed (6 instead of 3 GBit/s) are noticable here quite well.

Also not quite unimportant: The new system is as quiet as before and even uses a bit less energy :-).

Another positive aspect are the integrated USB 3 ports. In another post I told that external harddisks together on a separate USB 3 controller caused some trouble when copying a larger amount of data between the drives. I repeated this test as well with the new mainboard where the separate controller is not required any longer – and behold: here USB 3 works completely flawless :-). About 400 GB of data were copied without any problem or drive failures.

The speed also improved: An USB stick by Verbatim which provided about 85 MB/s before will now provide about 122 MB/s at the new mainboard which is an improvement of more than 40%.

I have to admit – there is still a little nerd inside me and it’s sometimes hard for me to resist modern technology ;-). On the other hand I am not a friend of throwing away stuff which still works fine just because it’s old. But after six years it’s adequate to replace a mainboard when the difference in performance is that high. I expect that this board will again last for at least the next five years, since there are still three PCIe slots available if I ever have to replace the sound card or think about a faster SSD in the future. I’m also quite satisfied that “modern” technology like USB 3 finally works as intended and I also can still use my old trackball in the same way as before (powering on the PC with a mouse click).

I’ve been using the board now for about 7 months now and I’m still quite pleased – except a very few issues with the network driver for Windows 7 (which are solved now) I had no problems at all.

The board is still in use with the described setup and as expected even after more than two years it is still perfectly suitable for all current requirements.

Meanwhile over four years have passed. In the meantime I have replaced all hard drives with SSDs (a total of about 1.75 TB) and the graphics card has been a Nvidia GTX 1060 with 6 GB for some time, connected to a screen with 4K resolution. Despite the age the system is still very powerful. Only 4K gaming makes no sense with newer titles due to the limited power of the graphics card (however full HD or 1440p are usually no problem at all). But otherwise all requirements in my everyday life as a software developer are fulfilled very well.

I replaced the mainboard and CPU with a model with a Xeon E5-1650 v2. This was not done because the existing hardware was too slow. I got the CPU as a gift and only needed a another mainboard and CPU cooler. So I could get additional CPU cores and general higher performance for very little expenditure.