I have an older scanner – a Canon LiDE 210. Canon also provides drivers for Windows 10, but they cause the Windows WIA service to crash quite often. Therefore I decided to look for an alternative and tried VueScan – an application which comes with its own drivers.

Before installing VueScan I needed to uninstall the existing Canon software and the old driver and also tell Windows to remove the driver files as well, so the original driver would not be used any longer.

The first impression was quite good – during the setup the universal scanner driver was installed and after connecting my old scanner I could use VueScan right away.

The universal driver by VueScan does not provide a TWAIN or WIA interface since it only needs to work with VueScan itself – but on the other hand this also means it is much more stable.

The options include everything you can think of, depending on the capabilities of the scanner: different scan modes, adjustable bit depth, skewing, automatic scan with adjustable time interval (very useful, when you want to scan a lot of slides manually), cropping, a bunch of filters and output formats including PDF, JPEG and TIFF. Even OCR is included.

Overall this is a quite solid and useful solution and it’s good to see that you can still use your old scanners with Windows 10.

The only downside: the Windows 10 version is not DPI aware which means the UI and the scan preview will be rendered at a four times lower resolution and look quite grainy on a 4K display with 200% scaling which is a pity for an application of this kind. More about this, see this article from Microsoft.

Process explorer shows that the executable is not DPI aware: 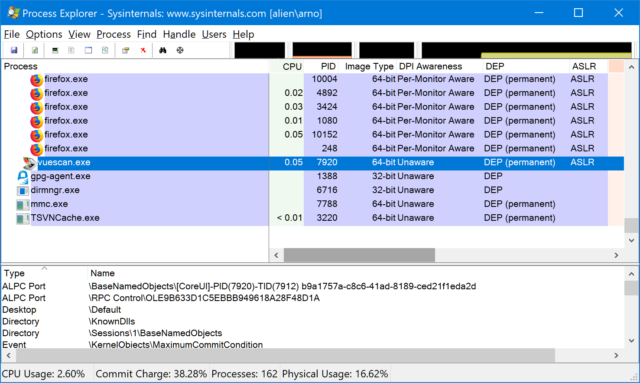 And the expected result when using VueScan on a 4K display with 200% scaling: 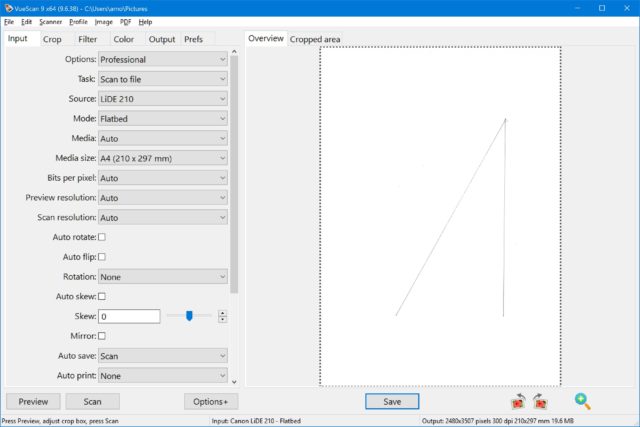 To illustrate this problem I enlarged a part of the Window where you can see the difference in the text of the title bar in native 4K resolution (which is handled by Windows itself) and the text of the menus and UI of the application itself: 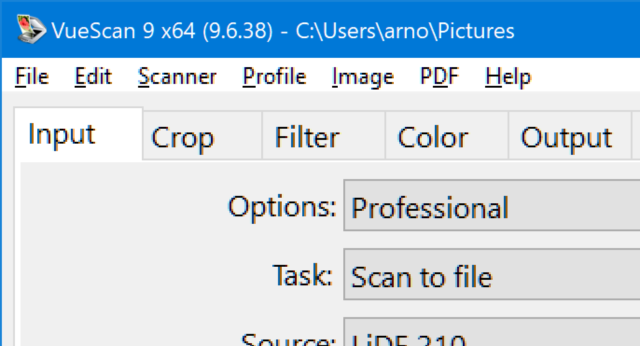 You can improve the UI somewhat by using the system DPI scaling of Windows for the application, but this will of course only change some labels and form elements, not the resolution of the scan preview: 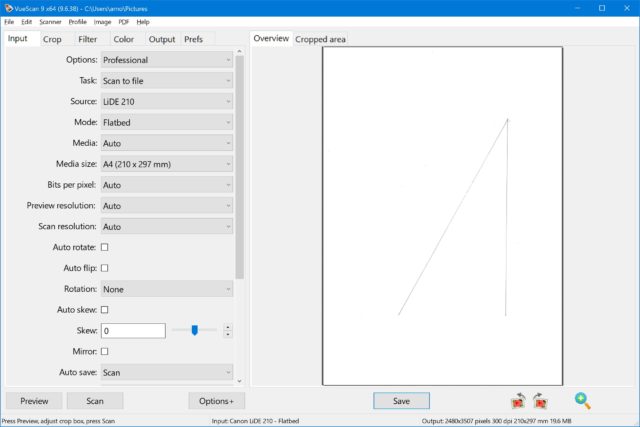 Experiences with the support

So I contacted the support:

I use Windows 10 with a 4K monitor and 200% scaling and just tried
VueScan since the original drivers for my old Canon LiDE 210 dont work very
reliable with Windows 10. Unfortuntely VueScan seems not to support HighDPI
scaling and is displayed very “grainy” (every pixel is doubled in size).

Do you plan to support HighDPI displays in Windows 10 in the future? Having
a preview in the native resolution of the monitor would be really useful!

In the reply by Ed Hamrick which followed very soon I was asked to send a logfile. Well – I was not sure, why a logfile is needed to answer my question but I did send it along with a screenshot (similar to the examples in this article) just to be sure, that there is no misunderstanding about what I was asking. I also explained that the screenshot illustrates the problem I was talking about.

After some conversion where I was not sure, if Ed Hamrick really understood what I asked him I got the answer:

I was really baffled by this harsh reaction and told him that this is not the way I expected to be treated as a customer. He even didn’t read the e-mail as he said he will never read long e-mails and after asking if he is at least aware what “DPI awareness” means he said yes, but he also told me that VueScan will not get support for it.

DPI awareness is not even planned and the way how my questions got answered did not give me the impression that it is a good idea to spend money for this software. So I will stick with the Canon drivers. Eventhough the Canon software is not so stable, it generally works and can also be used to scan images in all applications which support WIA.

Meanwhile I got a new “multifunction center”, a Brother MFC-J491DW, which contains a scanner with automatic document feeder. This device works fine in Windows 10 and is a sufficient replacement for my old Canon scanner.