As reported by Forbes, John Forester died at the age of 90. He was a vehement opponent of bicycle infrastructure that resulted in the separation of modes of transport.

The Tour de France is only for men so far. A group of French female cyclists want to change that.

The Guardian published a number of cartoons about “cycling in the city” by Dave Walker:

Since I live in Berlin I drive significantly longer distances in everday life than in Augsburg. Together with the all-year use also during winter or on rainy days the rims which I laced in eraly 2015 got clearly worn out by the brakes after many thousands of kilometres of city traffic.

The new rims are again Ryde Andra 30 but now with black painting which fits the black frame of the bicycle quite well:

In contrast to the old rims I did not enlarge the valve holes and now use tubes with presta valves (also known as “french valves”) again. The tires are still relatively new and will continue to be used.

I already had a longer ride of about 42 km on the Berlin Sternfahrt 2019 with the new rims and everything worked quite well – nearly like a new bicycle :-).

I would have liked to buy the rims from a nearby bicycle dealer – however, he was unable to obtain this model with 32 and 36 holes from his wholesaler. In the end I ended up with Komponentix, who are also based in Berlin. Here I could order online and then pick up the rims on site.

In March 2017 I visited the Berliner Fahrradschau and besides many other interesting things I also discovered the bicycle bell by Spurcycle. I could have bought a copy a the booth but I postponed that since I didn’t know where to mount it – because the handle bar was already quite cramped due to the gear indicators of the shift levers. The mounting of the old bell, a “Charly” by Mounty, was already cumbersome under the gear indicators and I never was very happy with this solution.

END_OF_DOCUMENT_TOKEN_TO_BE_REPLACED

Yesterday I attended the “Ride of Silence” in Berlin for the first time. The sad reason for this event was to remember the 17 cyclists who died in the traffic last year in Berlin.

END_OF_DOCUMENT_TOKEN_TO_BE_REPLACED 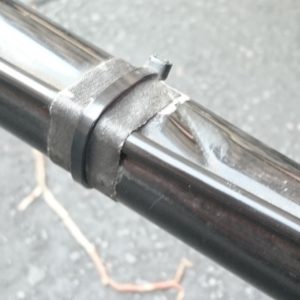 Yesterday I noticed by chance that the frame of my everday crosser has a dent :-(. I didn’t see it before as it is on the right lower side and you can barely see it from the top or from the side.

I believe that the dent was caused by my accident in February. There my bicycle lied on it’s side at the end next to the curb – propably the curb left this mark on the impact of the frame.

However the frame is made of steel and the dent is not at a right angle to the tube and also not near a weldseam – therefore I will just let be like this for now and check the frame for cracks from time to time, as a new frame will cost more than 400 EUR. 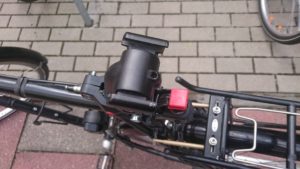 A couple of days ago the saddle on my every day crosser got stolen :-(. At least only the saddle and not other parts as well.

It was a pitty anyway as also a screw on the seat post was missing which you can’t get easy as a spare part due to its special diameter (M7). In fact the seat post got unusable because of that.

I bought a new seatpost by Ergotec and a saddle. Instead of the Brooks B17 there is now a “plastic saddle” by Terry which is hopefully not that attractive for thiefs. At least the new saddle is quite similar to the B17 in its dimensions and it is also quite comfortable.

Meanwhile I participated the second Critical Mass in Berlin (you will also find pictures here and additional information here) since I’ve been living here. As last time it was quite impressive even though it looked like a fair sometimes when people started to fill their stock of beer in one of the 24/7 shops or pick up a döner along the route.

END_OF_DOCUMENT_TOKEN_TO_BE_REPLACED 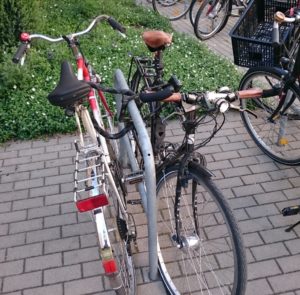 Nearly two weeks I could stand it without my Surly – but today I finally took it out from the self storage in Lichtenberg and took the opportunity to do a little tour through Berlin on the way back (from there to the appartement it was about 13 km).

Now the Berlin Oldie and the Surly stand together in the backyard. The Berlin oldie will not be used very often in the near future, but  I will keep it for guests or in case I don’t want to take the “good” bicycle with me. And generally you can not have enough bicycles anyway ;-).