Since a while Google Maps also offers a 3D view in modern browsers which support WebGL – similar to the way it is possible with the separate application „Google Earth“. For this you just have to click the “Earth” symbol in the lower left corner of the map view: 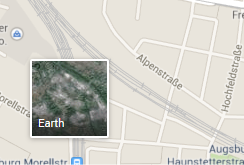 If you are not sure if your browser generally supports WebGL you may first try my little example for WebGL.

END_OF_DOCUMENT_TOKEN_TO_BE_REPLACED

Originally Internet Explorer 11 was only available for Windows 8. Recently a version for Windows 7 became available as well, which is distributed via Windows Update.

One major improvement: this version now also supports WebGL – so you can watch my little demo with the Internet Explorer as well and one can expect that WebGL will not only be used for demos in the future but also for “real” applications. The full screen mode for canvas elements is not supported yet, which is why the respective button is disabled.

“Google Body” was one of the early examples for the possibilities of WebGL – an interactive display of the human body as 3D model. Meanwhile this application is not available any longer at Google but at http://www.zygotebody.com.

With my little example you can also check if your browser generally supports WebGL.