Microsoft created this technology already in Windows XP with the name “ClearType” (also see http://www.microsoft.com/typography/cleartypeinfo.mspx), where it had to enabled manually since at the time of introduction LCDs where not very common.

Differences between picture tubes and LCDs

Picture tubes are technically not able to map single pixels exactly to RGB triplets. Instead a single pixel which was created by the graphics card will be displayed using more or less big “clouds” of red, green and blue dots. Therefore every picture is always a bit blurry but on the other hand stairs and edges on lines and round shapes are not very distinct since you can not see single pixels exactly:

On LCDs in contrast every pixel will be displayed exactly by using three subpixels. The result is a quite sharp picture, but this will also make stairs of slanted lines and round shapes clearly visible:

Without subpixel-rendering fonts will only be displayed in two colours, as for example the letter „A“ shown here in large magnification: In fact the letter is not that uniform as it appears as you can see in the original with higher resolution: 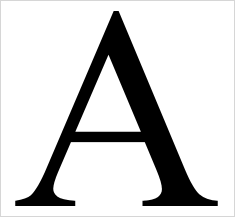 If you examine the structure on an LCD you will see the subpixels which make up the display – here for example an RGB matrix which is common for many LCDs: You can see that the number of subpixels is much higher than the number of pixels used in the black/white-display. This will be used to display the exact shape of the letter more precise. For example the two lines on both sides are not exactly the same thickness and may be even thinner than one pixel. The picture as it will be created by the operating system will look like this in large magnification: Correct adjustment to the display

To make the correct display at the level of subpixels work the operating system needs to know how the basic colours are set up. The setup (RGB) shown in the examples is very common for the most screens but there are exceptions (BGR). If the setup is not correct there are quite strong colour fringes around the letters. If the text looks “chromatic” or “fringed” you should first check if the setup of the subpixels is correct.

In the following example you can see the effect quite good. Important – the picture should be displayed without any change of its size (263×118 pixels):

If the own screen displays pixels using RGB triplets the lower example should be more clear, otherwise the upper one.

The described method assumes a horizontal orientation of the subpixels. When using a pivot display – which means you turn the screen about 90° to use it in portrait orientation – the subpixels are set up vertically. In this case the result may look blurry since the letters will also be rotated 90° and therefore don’t exactly fit to the setup of the subpixels any longer.  The only solution then is two turn off subpixel rendering or using conventional methods for anti-aliasing with greyscales.