Note: the netbook described here is no longer in use. It was replaced by a notebook, a Lenovo X220, in 2016 which I nowadays also only use rarely.

Since I often move between Augsburg and Berlin, I thought about getting a mobile computer for a while. But a laptop was too big – and with appropriate battery runtime of at least 4-5 hours also quite expensive. Therefore my choice was a “netbook” with 10.2″ display – the Samsung NC10. 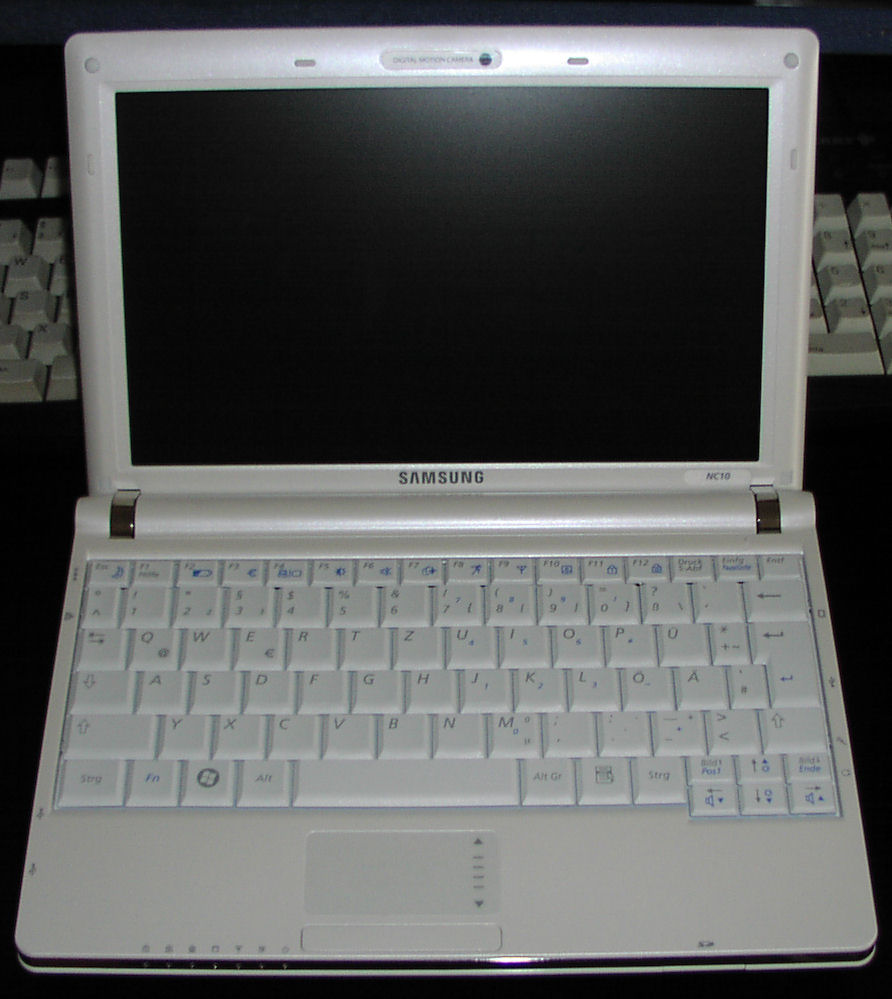 The configuration of the NC10 is very similar compared to netbooks of other manufacturers:

Bluetooth or UMTS are optional and missing in the model, which I’ve purchased – but there are also variants of the NC10 available, which provide bluetooth and integrated UMTS with or without a mobile phone contract.

At a first glance, you notice the very good workmanship – the case has a quite nice design and the keyboard is very usable due to its size and proportioning. Only the touchpad is a bit small. The display with a wide viewing angle has a matte surface and the whole case surface is not very suspectible to fingerprints due to the rough surface structure.

Especially the big battery is very convenient – 5 hours with one charge at normal usage are no problem at all. Nevertheless the battery is flush with the case and only needs a bit space at the bottom, which does not really bother. 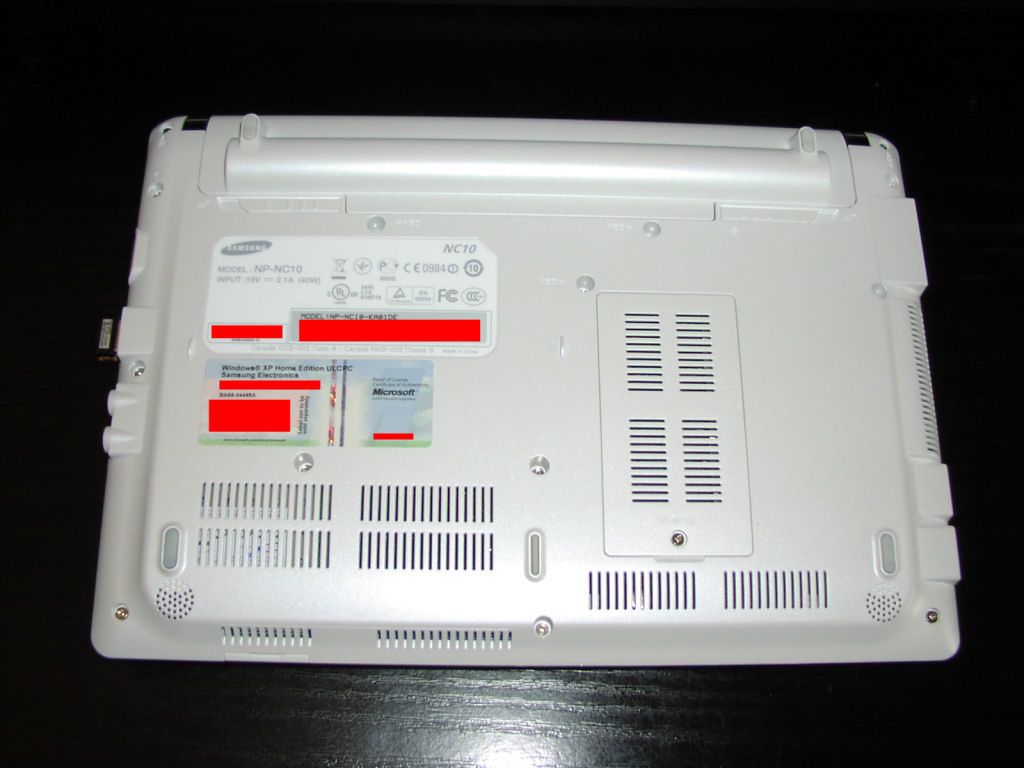 Another very convenient feature – the fan. Although the CPU has only 2.5 watts of power dissipation, most netbooks have a fan, as the chipset produces much more heat. Due to the limited space, those fans are quite small and often very noisy, as in the Acer Aspire One or the Asus EeePC 1000H. But this is not the case for the Samsung NC10 – the fan is barely noticable and you can even modify a setting in the BIOS, so the fan will constantly run at a low speed (and therefore very quiet). Even then the machine stays quite cool after long usage. If you look closer, you can see, how this is possible: At the bottom of the case there are ample ventilation openings, where cool air can directly get to the heat sink of the CPU and chipset. The warm air is exhausted at the side of the case, if neccessary supported by the fan. 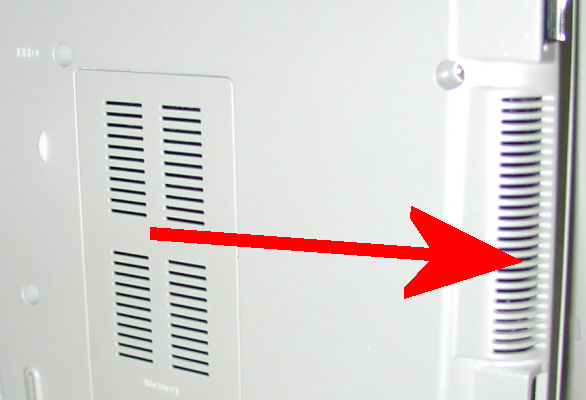 Expanding the memory is also very simple – you just have to open a small cover at the bottom of the case and can exchange the existing memory module. The whole process is also described in the manual and is possible without losing the warranty. I exchanged the module by a 2 GB module from Corsair, which was recognized without any problem.

The speakers where described to be very low quality in other tests. Well – you can not expect wonders of those tiny speakers. When using the audio output jack the sound quality is ok and to play back system sounds or short videos the internal speakers are sufficient.

In a device of this format, the keyboard is of course a bit limited in its size – nevertheless it is quite useable and has nearly the format of a regular PC keyboard.

The key for the characters “<” and “>” has an unusual position in the layout – it is not on the left side, where you would expect it, but on the right side, just next to the right shift key, which is smaller than usual. For writers, who type a lot, this may cause problems at the beginning.

There is Windows XP Home pre-installed with a number of tools. Installation media for operating system and drivers are also provided – but you need an additional external DVD drive with USB connector to use them.

When starting for the first time, you are first asked, which language version you want to use and how to partition the harddisc. Then two partitions will be created, one for the operating system and another one for your own data, whereas the second partition can be used for a complete backup of the system partition later. Additionally there is a special partition with 6 GB, which is not visible for Windows and contains a recovery system – “Recovery Solution III” – which is used to backup or restore data.

When using the function keys, you also get an optical feedback with half transparent symbols on the display:

Very convenient: Display brightness and WLAN support can be configured in the BIOS in a way, that the last setting remains even after turning off and restarting the system and independant of the kind of power supply.

As already mentioned, there is a special partition with a recovery system beside the regular operationg system, which Samsung names “Recovery Solution III”. This system can be started through the BIOS by pressing [F4] when booting the system before the operating system starts. In fact this is just a minimal Windows installation (probably a PE environment), which only runs the software for backing up respectively restoring data.

Although i was a bit sceptic in the beginning – the system works quite well. When starting for the first time, the initial operating system installation will be backed up as part of the initial configuration process. Additionally you can always backup the whole system partition with the operation system as an image and restore it completely later. As the backup software is available independant of the installed operating system, it provides a real desaster recovery in case the system has to be restored due to malware or faulty drivers etc.. A backup to external media, like USB sticks, is also possible. 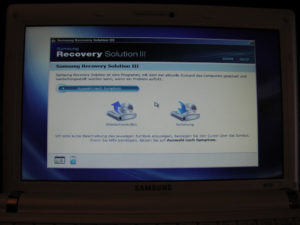 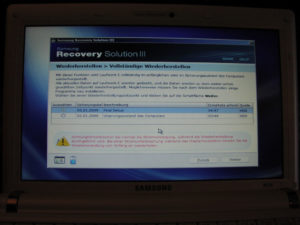 Finally some screenshots of the BIOS settings (version 04CA) – for a netbook there are quite a lot of things you can change, e.g. the fan control or the behaviour of the settings for display brightness and WLAN support. Booting via PXE over the network is also possible.

Considering the price of less than 400 EUR (beginning of 2009 in Germay – some dealers offer this machine already for about 375 EUR) I can recommend the Samsung NC10 absolutely. It is built very well, with 1.3 kG not too heavy, runs more than 5 hours with one battery charge and offers a lot of useful details, as the easy expandability of the memory, the permament setting of the display brightness and WLAN support and a lot of configuration options in the BIOS. The fan is very quiet even after a number of hours of constant use and the build in harddisc by Samsung is also nearly silent and the device does not get very warm – a point, which is often a problem with other netbooks. Finally you also get a good matte display without “glossy” surface – very uncommon today also for many “big” laptops.

Only the missing bluetooth support and the small touchpad are compromises you have to accept – but you can get the NC10 with bluetooth and UMTS as well for a higher price. Anyway – the touchpad as still very usable and bluetooth can be added very easy by using a mini USB adapter. When using a carrying case with enough room (e.g. “HAMA Comfort” for 10.2″ netbooks) you can also leave the adapter at the device all the time.

Update after the first year

Meanwhile I use the device for a bit more than one year quite regularly – not daily, but at least several times a week. The good impression from the beginning did last. The run time of the battery reduced only a little bit during this time and everything in the device still works perfect.

I mounted the originally external bluetooth adapter internally, according to the instructions in http://www.mobil-talk.de/netbook-co/3915-bluetooth-intern-nachr-sten-am-samsung-nc10.html – an appropriate connector exists on the mainboard, so only a matching plug had to be obtained and some soldering on the adapter was neccessary. Fortunately, the run time of the battery was not reduced considerably by the permanent bluetooth support – and I now have all USB ports available and mobile internet useage using a mobile phone is also very comfortable. Also presentations through the VGA output using a beamer and remote control with the mobile are no problem – and sometimes caused suprised looks ;-) 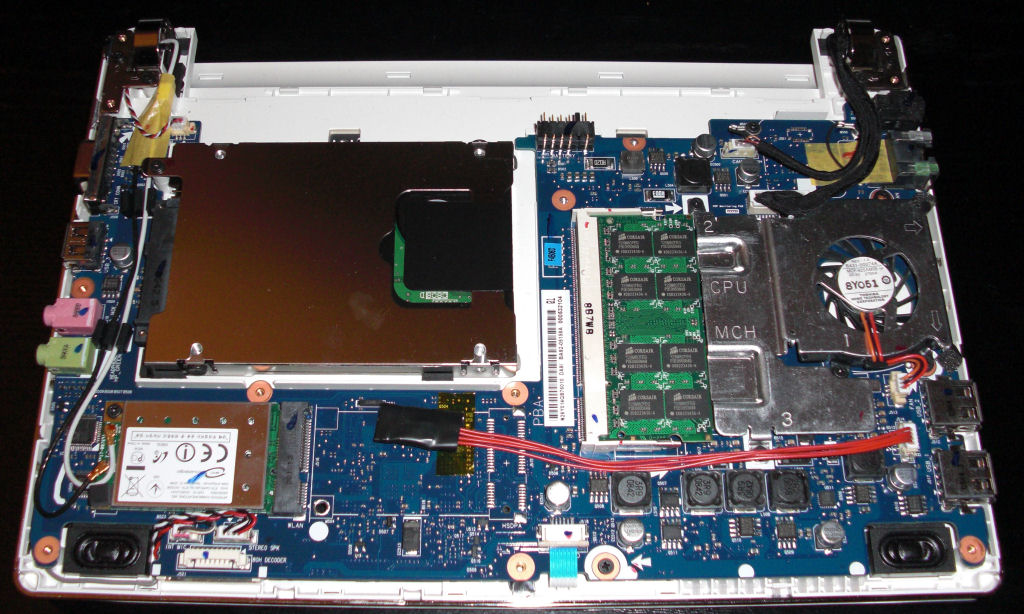 Since SSDs are quite affordable by now (as of end of 2010) and I don’t use more than about 30-40 GB of storage capacity, the internal harddisc was replaced by a SSD in the meantime (a OCZ Vertex 2 Extended with 60 GB to be precise), which is clearly faster. Thus starting the operating system or applications is just a matter of seconds now and mechanical shocks during the operation are no problem any longer.

After pretty much three years signs of wear show up: the display does not work reliable any longer. But with some skill this can be repaired…

See more in the article including detailed pictures (German – sorry, no translation available).

Otherwise the netbook still works fine and after the repair this will be so for a while.

Unfortunately, Samsung tends to change their URLs often – I try to keep them up to date, but they may not work any longer.

Support for the NC10 at Samsung (BIOS, drivers etc.)