Recently a good friend of mine gave me a used Intel Xeon E5-1650 v2 which he didn’t need any longer as a gift. According to the data of Intel this model was already introduced in the third quarter of 2013 and is therefore 7 years old as of August 2020.

Calling this “retro” may be a bit exaggerated – but it is a valid question if using such an old processor still makes sens in the year 2020. Current models provide more performance while also often using less power. In addition memory modules with DDR4 provide a higher throughput as well.

On the other hand my old PC is still mostly based on the hardware with a Xeon E3 which I bought already in 2014 and which got equipped with SSDs as mass storage and a new graphics card running a 4K display. Despite its age it is still usable quite well. Moving to the Xeon E5 would be an easy upgrade since I only would have to change the mainboard and the CPU cooler. The existing RAM modules could be used unchanged.

Technologically the Intel Xeon E5-1650 v2 is a bit older than to the Intel Xeon E3-1231 v3 (Ivy Bridge instead of Haswell). However it was also already manufactured using the 22nm process. Following is a direct comparison:

With the additional cores and double the number of memory channels the E5 provides performance reserves which are handy when using virtual machines and applications with high memory usage.

Because of the change from socket 1150 to sockel 2011 a new mainboard is required. I decided to get a used ASUS Rampage IV Formula which you still can get from a number of professional sellers of used hardware. The existing memory based on four PC3-12800 modules with 8 GB each could still be used.

The Rampage IV Formula is based on the Intel X79 chipset and was marketed by ASUS under the brand “Republic of Gamers” (ROG). 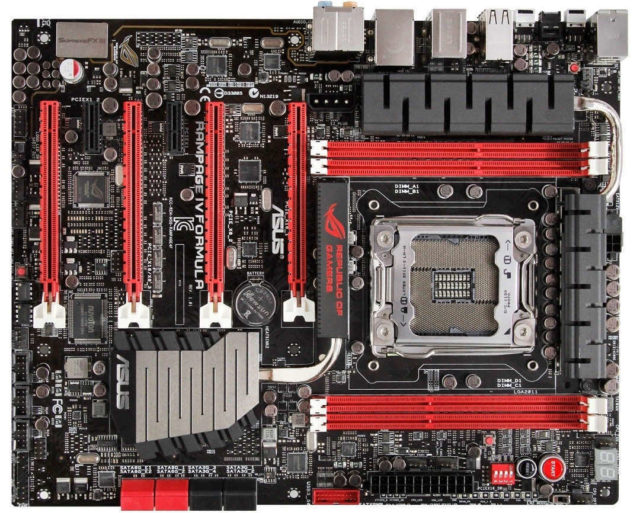 Eventhough I don’t see myself as “gamer” I still welcome extensions like the integrated seven segment display for POST codes to diagnose errors and the extensive configuration options in the BIOS.

In addition this mainboard provides:

There are also many connectors for PWM fans, temperature sensors and front panel audio.

The only thing I am missing compared to the MSI Z97 PC Mate is a connector for RS232 using a slot bracket. I still use that for some tinkering with old hardware and unfortunately USB adapters don’t work with all devices. However there are PCIe cards for RS232 which should fill this gap. The fact that there are no PCI slots any longer is no problem since I don’t have any PCI card which might be useful for anything.

The integrated audio solution is advertised by ASUS as “SupremeFX III” – but in fact this is nothing else than a Realtek ALC889 covered with a metal shielding. This becomes obvious when you install the drivers for it. On the other hand the LAN interface is based on a solution by Intel which I welcome since I often had problems with the drivers by Realtek.

Six of the SATA ports are driven by the chipset and four ports by an additional controller, an ASMedia ASM1061 which is also used for the external eSATA connectors and is not suitable for optical drives. For all internal drives I only use the connectors of the chipset. 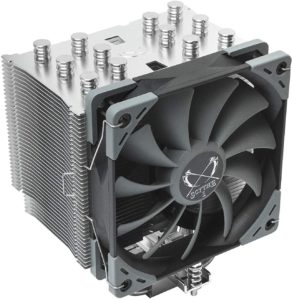 Due to the positive experiences with the Arctic Cooling Freezer 7 Pro in the past I first tried an Arctic Cooling Freezer 12. Unfortunately the results were not very convincing: even with light CPU load the fan control of the mainboard increased the speed to 1500 rpm and more which was also quite audible. In addition the speed was constantly changed as well.

As an alternative I now use a Scythe Mugen 5 Rev. B. This cooler is more than twice as expensive as the model by Arctic Cooling – but thanks to six heatpipes the CPU stays cooler and the provided 120 mm fan rarely runs faster then 600-700 rpm even under high load. In addition vibrations will be dampened by the rubber covers in the corners of the fan. The result is a system which is nearly inaudible in every situation.

Mounting the CPU cooler is not very hard thanks to the very good manual by Scythe. First you attach four mounting posts which you can tighten using the provided Phillips screwdriver. On top of these mounting posts you put two metal brackes which are also held in position with screws. Finally the cooler itself is attached to these brackes with two screws which push the cooler onto the heatspreader of the CPU using sprints. The fan is then attached using two wire clamps. If needed the clamps can be opened by hand very easily.

Eventhough the mainboard is not very small the CPU cooler covers nearly half of it: 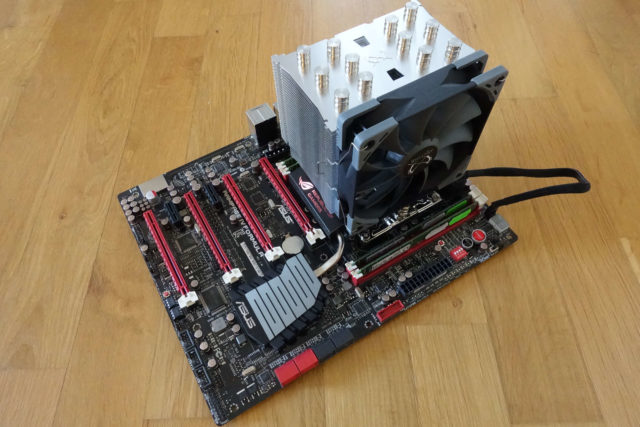 The final build looks mostly as the before. I just changed the cable routing a bit: 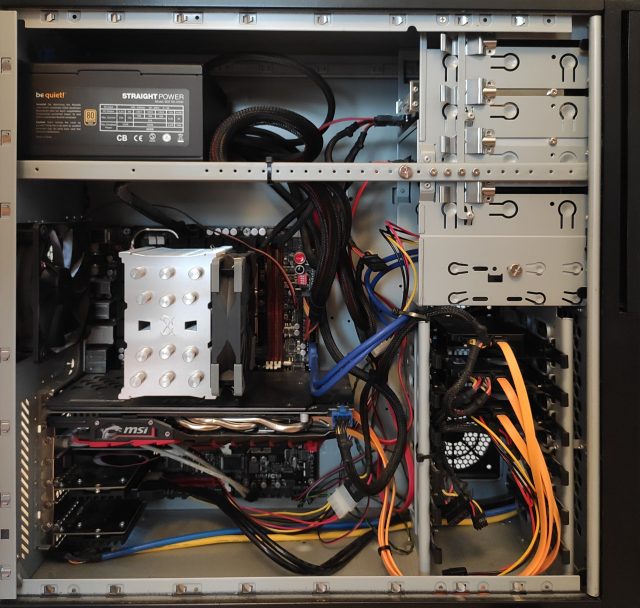 (The picture shows the current build in April 2021)

The data according to CPU-Z:

The additional cores of the E5 and the improved memory interface provides a better overall performance. However the difference depends on the used software but is often at least 20-40%. A positive aspect is that the system only uses about 20 watts more power under full load. For normal desktop use there is barely a difference.

Thanks to the CPU cooler – which I can fully recommend  – the system is still nearly inaudible and despite the used hardware the stability is also not a problem.

Despite its age, the system has now been running absolutely reliably for almost 9 months :-).

Besides the SATA-SSDs there are now also two NVME-SSDs on their own PCIe cards, “kryoM.2” to be specific: 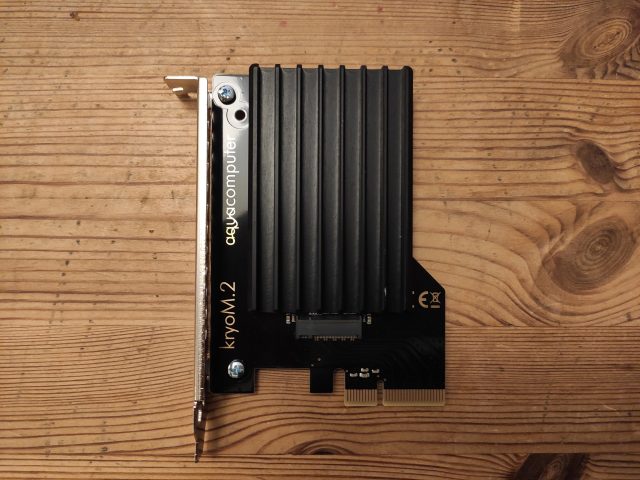 These drives support about 3.2 GB/s reading and about 2.7 GB/s writing which is about five times faster than the fastest SATA-SSD I have. Thanks to a modified UEFI-BIOS the system can also boot from one of the two NVME-SSDs even though X79 based boards officially don’t support this ;-).

In addition I also built in two I/O cards: