In my device collection there is also a Roland Sound Canvas SC-55 which I bought used many years ago.

This is a MIDI synthesizer that came onto the market in 1991. I don’t know for sure whether my copy is that old, but an age of at least 25 years is plausible.

After such a long time the contacts of almost all buttons are defective, probably due to a combination of oxidation and wear. The only repair option is to replace the buttons which do not correspond to a design that is common nowadays – squared with two connections. Today’s buttons of this type usually have four connections. Fortunately I have found a supplier who has exactly these buttons on offer as spare parts. In the package there was also a bag of sweets to make the repair a little more pleasant ;-). 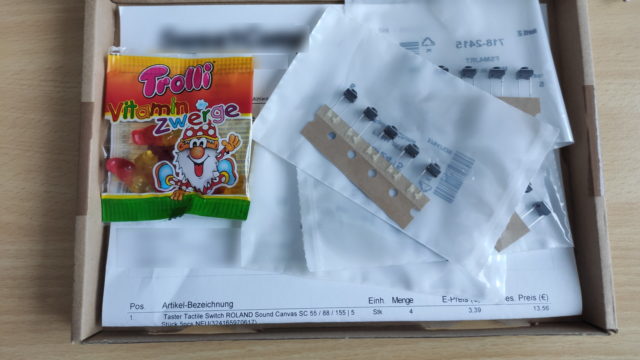 In order to be able to dismantle the front part of the housing I first had to loosen several cables that Roland had laid with cable ties. The ribbon cable for the display was connected with a special clamp connector. To open it I carefully pressed the side parts outwards from above with a small precision mechanics screwdriver and lifted them at the same time. The ribbon cable can then simply be pulled out. When reinserting you just have to be careful to straighten the tinned ends so that they come back reliably into the intended openings.

On the following pictures you can see the condition after the repair, where I used new cable ties. For such actions it is advisable to take pictures beforehand so that you will later know how the cables were originally connected – because two audio lines with identical connectors are connected in the area of the headphone output, but only one of them serves as an output. If you swap these lines, the headphone output will not work.

I replaced a total of 17 buttons: the “Power” button on the left and all 16 buttons for the keypad on the right. Unsoldering the old buttons was not as trivial as I hoped, as Roland bent the connections outwards before soldering in order to fix the buttons in place. The two illuminated buttons for “All” and “Mute” still work flawlessly despite their age and did not have to be replaced.

In total, the action lasted almost three hours. But the effort was worth it – after assembly, the device and all buttons were usable again without any problems. 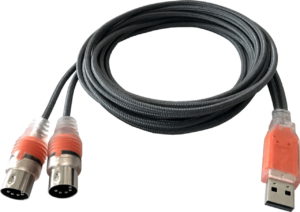 In Renoise, the Roland SC-55 can be used as an output device with this MIDI interface. This way I was able to test the correct function after assembly.

By the way – you can still find a manual for the SC-55 at Roland as a PDF: https://cdn.roland.com/assets/media/pdf/SC-55_OM.pdf