This text was orginally published as a blog post in 2013 and the first version of this card was already introduced in 2003. But since this board is still offered, I decided to include it as a project page in “electronics”.

The Velleman K8055N is an interface card with USB connection which provides several analog and digital in- and outputs. Since the thing is distributed as a construction kit it is quite affordable for around 30 EUR – on the other hand the assembly takes a while due to the number of components and the 313 soldering points. 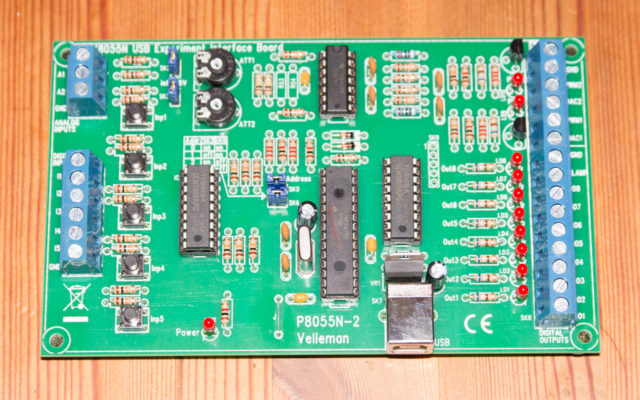 The configuration at a glance:

Due to the variable device address it is possible to use up to four of these cards simultaneously on one computer. The gain of the analog inputs can be increased with two optional resistors, if the input range of 0-5 volts is not sufficient.

Optionally you can also mount a connection which can be used to program the PIC directly on the board if you have an appropriate programmer for that.

The card advertises itself to a computer under Windows as a “Humand Interface Device” (HID) and is therefore usable without any special driver. For first tests there is a demo program with which you can check all inputs and outputs. To make the integration in your own applications easier, Velleman also provides a comprehensive documentation and many samples in different programming languages.

In my package the software was indeed not included but I had first to download it at https://www.velleman.eu/support/downloads/?code=K8055N, where you also find the documentation. For Linux you will find a library at https://github.com/rm-hull/k8055.

On http://jannicash.info/k8055/ you find an open source version of the firmware.

Following is a little demo video to show the device in action:

Meanwhile I use different hardware but the card is still usable even with Windows 10 Pro x64, after I have solved some problems with the USB controller.

I also updated the links as some of them did either not exist any longer or got updated.