The designation “HDSP-2000” refers to different variants of LED matrix displays that were developed by Hewlett Hackard and later also offered in a variant by Siemens. What they all have in common is that they display four characters with a matrix of 5×7 characters each with a height of 3.7 mm and use a DIL-12 housing. Multiple displays can also be placed side by side to form longer lines of text.

The first displays with red LEDs were used in devices such as the HP 9825A in 1976. Later there were also other variants with yellow and green LEDs. A special feature is the elaborate construction with ceramic carrier and glass cover, which was colored in the red version to achieve a higher contrast.

A simpler version was also produced by Siemens under the designation “HDSP 2000LP”, which was only encapsulated in a plastic housing. This is compatible with the HP models and can be used as a direct replacement.

The operating voltage is 5 volts. According to the data sheet, the maximum power consumption depends on the number of active LEDs and is 1.24 watts, which corresponds to 248 mA.

The package is a narrow DIL-12 housing as a ceramic carrier or encapsulated in plastic. Pin 1 is marked with a white dot on the back of the housing, with the variant HDSP 2000LP from Siemens it is a white triangle on the side of the housing.

Description of the pins

In contrast to “smart displays” like the HDSP-211x or DL-2416 this display type works with a simple shift register. The block diagram from the datasheet by Siemens shows the construction: 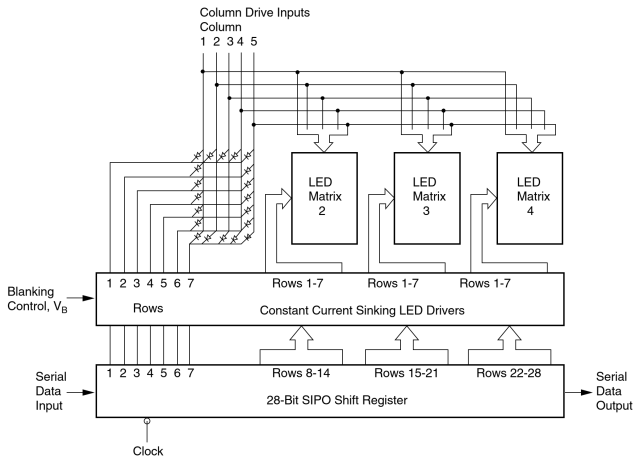 The following points must be observed when transferring the display content:

Important: The inputs for the columns control the LEDs directly and therefore cannot be connected directly to the outputs of a microcontroller, as this would overload them! According to the data sheet, they should be operated with 2.4 to 3.5 volts.

You find more details about this in the application Note 2016 by HP.