First of all: If you are interested in old computers or if you remember the “good old times”, I recommend to have a look into the links.

At the tender age of about 13 years I first encountered one of the typical “home computers” of that time. At this time, machines as the ZX81 by Sinclair, the TI99 4/A by Texas Instruments and of course the Commodore VC20 where state of the art. It was already one of my hobbies to tinker with electronic circuits, I bought many professional journals and devoured nearly everything, which had to do with electronics and computers.

In a big store in Augsburg one of the first computer shops where opened. Homecomputers where shown as demonstration devices there and I spent many hours after school in this shop to learn programming on one of the VC20s. I learned BASIC from journals, designed programs on paper and tried them out on the demonstration devices, to see if my ideas would work.

To my delight one day also “datasettes” where installed – modified cassette recorders, which where used to store programs on music cassettes (MC – another relict, which survived even with CD and MP3 surprisingly long). So I could save my work of the afternoon before leaving the shop and continue where I stopped on the next day. After a while, the whole thing developed to a regular meeting place, where you could find all the people with similar interests – a quite friendly community, which also spread to other computer shops :-).

The data memories of that time – music cassettes, here a “reference model” by TDK

After I’ve saved enough money, the big day came: I finally could afford my own computer – a used Commodore VC20 with datasette. An old black & white TV was used as screen, about the size of a 12″ monitor, which I got as a gift from my family. Although the successor C64 was already available, the VC20 was totally sufficient for me. In the beginning I barely didn’t do anything else than spending time at the computer. Besides BASIC I soon started to learn the technical details about the hardware. Programming was always more interesting for me than playing video games or using existing software.

The development of computers went on and the Commodore C64 started to get more popular at many of my friends. But I discovered another model, which was not very common in Germany, but which fascinated me technically much more: the Atari 800 XL. This machine had 64 kB RAM as the C64, a 6502 compatible CPU, which was clocked at about 1 Mhz, but offered a much more powerful hardware in terms of audio and video output (the same people, wich developed this stuff where later involved in the development of the Amiga hardware).

At that time I could get a new 800 XL for the ridicoulus price of less than about 100 EUR. After a short while, a mass storage device was added – again a cassette recorder. Disc drives where available (as it was for the VC20), but they where much too expensive for me. The TV was replaced by a color model – pure luxury ;-).

On the Atari, BASIC was soon not enough and I started to deal with 6502 assembler. Since the offering of software was not very big in Germany and I did not have a lot of money (I was still in school), I started to write a simple program in BASIC to translate 6502 commands into machine code. As the BASIC version worked quite well, I developed an improved version in assembler, which stayed resident in a protected area of the memory and could be activated in nearly any program by pressing a hot key. I sent this version to one of the German computer magazines of that time – “Computer Kontakt” – and it was awarded as “top program of the month” (programs where published in printed form of the source code) combined with a prize money of 1000 DM (500 EUR). 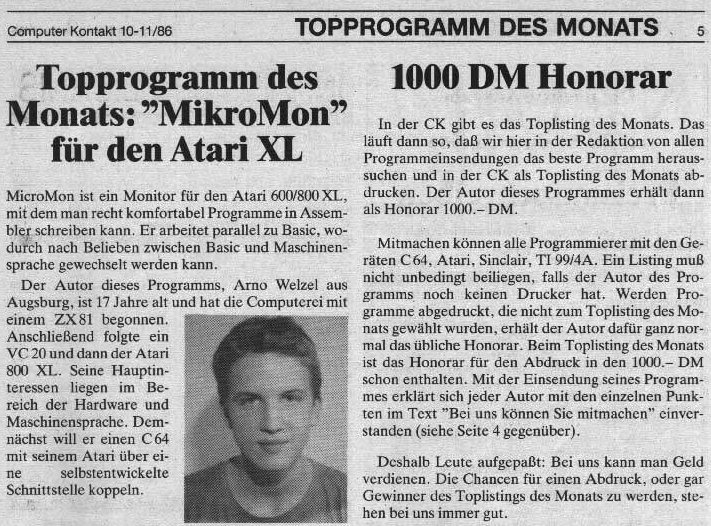 My first publication in “Computer Kontakt”

There is also a copy of that issue in the Internet Archive: Computer Kontakt 10-11/86.

I used the money to buy a better model – what else ;-) – an Atari 130 XE including a 5.25″ disc drive. The 130 XE was quite similar to the 800 XL, but it already used a housing in the design of the Atari ST series and it had 128 kB RAM (where the half of it was accessed page wise through a bank switching method, due to the limited address space of the CPU, which could only access 64 kB directly). The disc drive was later extended with a “turbo chip”, which improved the speed and the capacity.

Meanwhile part of the “working population” (even though still in education) I could afford an Atari 1040 STE with a high resolution black & white screen. This machine was a quantum leap compared to the 130 XE: a 32 bit CPU (Motorola 68000) running at 8 MHz, 1 MB RAM (which I soon extended to 4 MB), an internal 3.5″ disc drive and a screen, which provided a razor sharp display with 640×400 pixels at 72 Hz. Later a SCSI harddisc with a capacity of 250 MB was added and many other extensions, like a faster serial port, an alternative operating system (“Mag!X”, renamed to “Magic” later), which was stored in an EPROM and a 1.44 MB disc drive (the regular disc drive only provided 720 kB) including a new floppy disc controller. Even the original operating system “TOS” (The Operating System) already provided a graphical user interface based on GEM.

An ink jet printer (HP DeskJet 500) and a 19200 baud modem completed the ensemble to a full-blown computer work place, which provided good service for many years.

On this machine I learned something new again: 68000 assembler, “C” and the wonderful possibilities of LaTeX, where a port existed for the Atari ST. I started to work on my first big project in C: “Thing” (the name was taken from a pub in Augsburg, which still exists and is pronounced “ting”, also see http://www.mein-thing.de) – intended as a replacement for the quite simple desktop of TOS. There was already an alternative desktop, “Gemini”, which was very successful, but Gemini was a “dead” project, which was not developed any further. In the beginning, “Thing” was just an avocation – but after publishing the first version it had soon many happy users and the whole project started to become a regular part of the Atari software scene. I found many helping hands, which provided additional stuff (Thomas Binder, whom I am indebted, also for the further development and support, Holger Weets and his genius help system “ST-Guide”, Thomas Schulze, who provided nice fonts and Thomas Künneth with “ThingImg”, which made it possible to use colored pictures as desktop background in Thing). 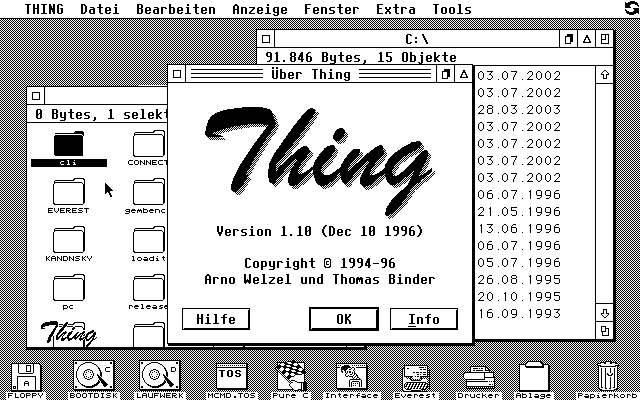 A screenshot of “Thing”, how it looked on my 1040 STE (yes, you only could use two colors – but if possible, Thing also used the better graphics modes on newer machines)

After I started to work professionally with PCs and even bought a PC for my own, I had to give up the work on Thing and handed the project over to Thomas Binder. Atari was also already headed south – the end was foreseeable even in the mid of the 90s, but the time with the Atari was one of the most important experiences for my carreer – not least because of the work on Thing (graphical user interfaces, programming in C, event oriented program flow and many more).

And if you are interested in building your own version – it’s open source and available here:

1996 I already worked professionally with PCs. After finishing education and compulsory community service I could transfer my knowledge of C to the world of Microsoft Windows. Of course a private PC was very benificial – even when I knew the language quite well, Windows was completely new to me in terms of programming and the possibility to educate myself was very welcome. Later I also discovered Linux and besides C many other programming languages (Pascal, Java, PHP, SQL, shell scripts under Linux etc.).

My first private PC was a Pentium 75 with 16 MB RAM (which was soon extended to 32 MB), a graphics card with a S3 Trio 32 chip and 2 MB RAM, a “soundblaster compatible” sound card with a MIDI module, which was added later, a 850 MB harddisc and a 2x CD ROM drive by Mitsumi. The whole thing was build into a midi tower and I afforded the luxury of a 15″ color screen by Sony with a Trinitron tube, which provided a brilliant picture and survived quite a few PCs.

Since then I never bought a complete PC again, but only exchanged single components or I built my machines from single parts. I discovered interesting things as the Matrox Mystique (3D graphics in real time, 640×480 pixels and 16 bit color depth – wow) or the Monster 3D by Diamond with a Voodoo Graphics chipset (Quake GL and loop through cable – anyone remembers?). 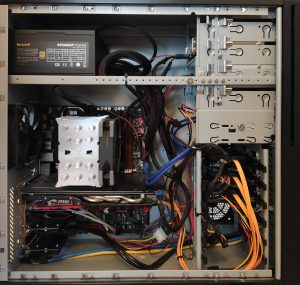 Besides the PCs there are also two PalmOS-PDAs which are both not used any longer – an old “Palm Pilot” by US Robotics and a Sony Clié with a high resolution color display, which provided good service until end of 2007 – at the moment I use a smartphone with Android, which also allows to synchronize the data with the PC. In addition to the PC I also use an old notebook, Lenovo X220 which replaced my old netbook, Samsung NC10.

The development in 37 years

Looking back to the beginnings I have made a little comparison: